In addition, approximately 25% of the high resolution airborne magnetic survey over the DOK copper-gold porphyry project located in northwest British Columbia has been completed.

In a press release out this morning, Boxxer Gold Corp. (TSX-V: BXX and OTC Other: BXXRF) updated the market on the Company’s activities, including; i) exploration results from 3D modelling of the three Titan-24 DCIP & MT surveys completed over the northern end of the Boss project, (ii) exploration plans for the DOK and East Breccia properties, and (iii) grant of 3.65 million stock options. A plan map showing the chargeability signature for the Boss project can be viewed on the Company’s website at www.boxxergold.com.

In the release, Boxxer’s President and CEO, Elmer B. Stewart, stated, “Boxxer is making excellent progress in implementing its corporate strategy of acquiring a portfolio of large poly-metallic copper projects in North America. The 3D solids model for the northern portion of the Boss project suggests that the anomalous copper-gold-silver geochemisty and oxide copper mineralization intersected in the first 6 holes of the current drilling program, are located on the edge of areas of stronger positive chargeability, but not in the optimal locations, a typical situation encountered in the early stage exploration of previously unexplored districts, essentially part of the “learning curve”.

Boxxer Gold Corp. (OTC Other: BXXRF; TSX-V: BXX), in diamond drill hole DDH-07-2011, has intersected three intervals of visible oxide copper (malachite-copper oxide mineral) mineralization. The Quantec survey covered a large area around the former Oro Amigo (copper-gold) mine and the Keystone Thrust fault. The results of the three Titan-24 surveys completed in this portion of the Boss project have been compiled into a three dimensional (“3D”) model. The results from the structural geological study should be received in the next couple of weeks.

Boxxer Gold Corp. (TSX-V: BXX, OTC Other: BXXRF), announced today that subject to regulatory approval, the Company has executed an option agreement whereby it has the right to earn a 100% working interest in the East Breccia copper-molybdenum-silver exploration property located in south-central Ontario, subject to a 3% Net Smelter Return (“NSR) held by the Optionors of the property.

* The reported copper-molybdenum-silver mineralization is hosted in the East Breccia and the south half of the West Breccia, located near the former Tribag Copper Mine site,

* The East Breccia has a surface dimension of approximately 550m by 700m and has been explored to a depth of 750m below surface, and

Commenting in the release, Boxxer Gold’s Vice President of Corporate Development, Colin Christensen stated:  “In our assessment of current global commodity fundamentals, Boxxer is continuing to implement its strategy of assembling a selective portfolio of high quality, copper exploration properties with the potential to host large poly-metallic deposits. The optioning of the East Breccia property, along with the recent acquisition of the DOK property in northwest British Columbia, in conjunction with the Company’s Boss property in southern Nevada, we feel we have positioned ourselves with projects that have world class mineral potential, and Boxxer intends to be very active with exploration on all three properties in 2011.”

Boxxer Gold Corp. (OTC Other: BXXRF; TSX-V: BXX) has entered into an agreement to earn a 100% interest in the DOK copper-gold porphyry property, consisting of seven contiguous claims across 18,500 acres, in Northwest British Columbia.  This is exactly why we like Boxxer Gold in that the identification and development of early stage properties with large, poly-metallic porphyry potential is what the Company is good at.  The Boss property in Nevada is the Company’s first such project and, with today’s announcement, the DOK property in BC is the second such project.  In terms of moving forward, at Boss, we expect to see ongoing drill results, and from DOK, we await the implementation of a mapping and sampling program along with aeormagnetic and IP surveys.  Two properties means twice the news and twice the bang for your buck as a shareholder.  Congrats to Boxxer Gold.

Want to get up close and personal with Boxxer Gold (OTC Other: BXXRF; TSX-V: BXX) and its Boss Property near Las Vegas, but don’t have time to visit the property?  Have no fear, Boxxer will bring the property to you.  In this brief, but comprehensive video, the Boss Property is unveiled like never before, including commentary from Elmer B. Stewart, the Company’s President and CEO, incredible aerial footage (think IMAX), and a history of the Goodsprings Mining District.  Click the picture below to watch the video. 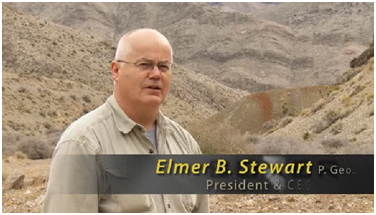 Boxxer Gold (OTC Other: BXXRF; TSX-V: BXX) has completed a follow-on sampling program at its 100% owned Crescent Peak project, highlights of which include the following:

BabyBullTwits
Create a free website or blog at WordPress.com.